Ignacio Álvarez is the chief engineer in Spain for the Silicon Valley company Eventbrite . At the beginning of summer he decided that it was time to leave the hustle and bustle of Madrid behind, so he packed his bags and came to Lanzarote to telecommute. 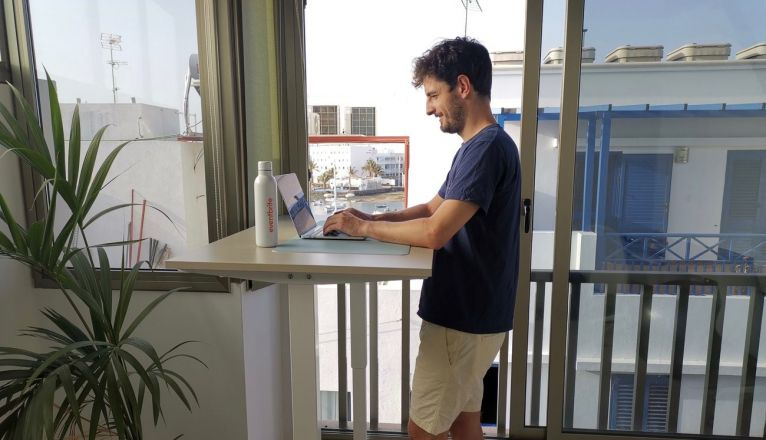 "I opted for Lanzarote because I have come on specific occasions and it is a paradise, personally I love it," says Ignacio.

Ignacio of the global technology platform for managing events and buying tickets is staying at a friend's house in Caleta de Famara, with the beach just 10 minutes from his "office" .

Ignacio opted for the island of Lanzarote for "its paradisiacal beaches and its good weather", but also because it is one of the most popular enclaves for diving in all of Spain, one of the young man's great passions.

"You finish work and you can go for a walk, go diving or go to the beach, in the end that translates into mental health, because you can disconnect ," he explains.

In addition, he emphasizes the life time that he saves by going to work by living in Lanzarote . "In Madrid you can take 50 minutes to go and 50 minutes to return from work and you see it as perfectly normal," he says. "You are not aware of the time you waste."

"Telecommuting, and especially in Lanzarote, gives you the advantage of being able to go, for example, to pick up your children at school if a problem arises and return without having to notify them because it doesn't take long," the engineer gives as an example.

However, many may wonder why Lanzarote and not an international destination, such as Thailand or Indonesia. "It is important to deny the myth that teleworking from another place is going on vacation, because it is not like that, I work a lot," he insists.

“In the end, if you go to the other side of the world, you start to have some other problem with the issue of time zones, and it is also easier to manage any problem from your own country, if something happens, not to mention that they are the same customs, you still feel at home”, he adds.

“Lanzarote has to invest more on teleworkers”

Despite the fact that Ignacio stresses that he has not yet found significant disadvantages or impediments when it comes to teleworking on the island, he points out that there is always room for improvement.

Specifically, he points out the case of connections and transport in general , since the geography and location of the island "practically forces you to buy a car".

"In big cities like Madrid you can always rent a motorcycle or an electric car for a few hours when you need it and then you can spend days without worrying about it," he explains. "Here in Lanzarote there is no such thing and also, depending on where you live, public transport may not run as often."

We have been doing it here at Buzz in Lanzarote to the UK since 2005 with one of the first fast ADSL lines on the island in Tahiche and we would never want to go back especially now!