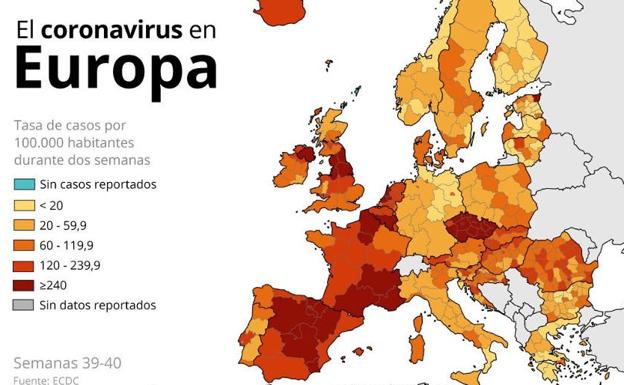 The Canary Islands appear in red on the first European map with a 'covid traffic light' that the European Centre for Disease Prevention and Control (ECDC) published yesterday for the first time. The countries of the European Union agreed to this tool last week to unify the rules by which each country closes borders and limits mobility, which translates into an epidemiological traffic light that will color each region based on its covid situation. In other words, it will allow the coordination of free movement restrictions in response to the spread of the virus.

This traffic light map, to be published every Thursday, will reflect the pandemic situation in each European country through a traffic light color scheme. The areas are marked in green, orange, red or gray depending on the number of cases per 100,000 inhabitants and the percentage of positives.

Sixteen EU countries appeared yesterday in red on the Covid map, including France, Spain, Poland and the United Kingdom, Italy, Cyprus, Estonia, Lithuania and Latvia appear in orange and only Norway, Finland and Greece appear in green.

The maps are based on data reported by the Member States of the EU and the European Economic Area (EEA) and the United Kingdom on the basis of the European Surveillance System.