The Civil Guard of the Fuerteventura Maritime Detachment has terminated "an operational network" developed in Lanzarote during the week of April 7th to 14th, in which two people have been arrested and another five investigated, as members of a group of dodgy fishermen. In addition, several vehicles and boats were seized, and 50 kilos of varied fish from the area were also intervened (pejeperros, bocinegros, horse mackerel, cabrillas, moray eels and roosters). 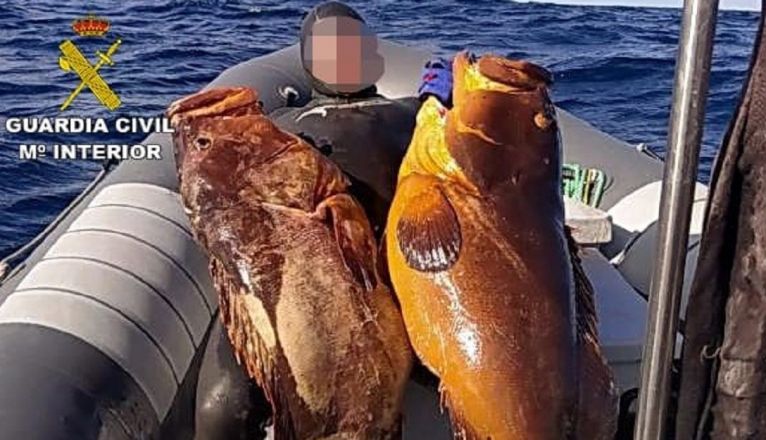 The operation began on April 7th, when the Civil Guard learned of the possible actions of a group of poachers who, "in a coordinated manner and with great deployment of means", planned to operate in the Marine Reserve that brings together the surroundings of the Island of La Graciosa and the Island of the North of Lanzarote. This Reserve has a special natural protection zone from fishing.

From the investigation carried out as a result of the events and the follow-ups, the Civil Guard reached the conclusion that this group had been operating for several months

The crime related to the protection of Flora and Fauna, included in the current Penal Code, establishes that it will be punished with a prison sentence of six months to two years or a fine of eight to twenty-four months, and special disqualification for profession or trade and special disqualification for the exercise of the right to hunt or fish for a period of two to four years, in contravention of the laws or other general provisions, destroys protected species of wild fauna.

According to article 335 of the Penal Code, anyone who hunts or fishes species other than those indicated in the previous article, when expressly prohibited by the specific regulations on hunting or fishing, will be punished with a sentence of eight to twelve months and special disqualification for the exercise of the right to hunt or fish for a period of two to five years.