Lanzarote and La Graciosa rise to alert level 3, this has been announced by the Minister of Health, Blas Trujillo, at the press conference after the extraordinary council of Government. Other islands that change level are Tenerife which rises to four and La Palma to level three. The rest of the islands remain at the level they were. 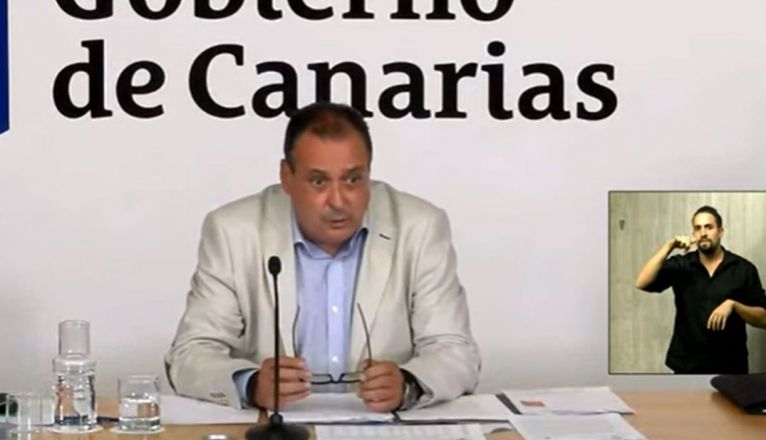 Trujillo explained that the islands that rise in level are those that have had a more worrying evolution in recent days and that the whole of the Archipelago is in a "situation of very high risk." Level changes will take effect at 00:00 on Monday, January 10th.

In the Autonomous Community as a whole, between December 27th and January 2nd, 24,896 new cases of Covid were reported, which represents an increase of 46.5% in the daily average of new cases in relation to the previous week .

The 7-day Accumulated Incidence rate in the Canary Islands increased by 46.5%, so that, from a weekly average of 781 cases per 100,000 inhabitants, it went to 1,144 cases this week. The greatest rise is observed in Lanzarote this week. This increase responds to the behavior of greater mobility of the population, as happens throughout Europe, and in a pandemic context marked by the predominance of the Omicron variant, which, as is known, is up to 80 percent more transmissible.

As has been observed, Tenerife has steadily evolved in an upward trend in the indicators of accumulated incidence at a very high risk level and the care indicators have progressively placed themselves in a percentage of occupancy of critical care beds, already this week, in very high risk level, which determines the passage to health alert level 4.

Lanzarote and La Palma go to level 3 because they are currently in a situation of high transmission risk , due to a very abrupt worsening of the epidemiological situation with an exponential increase in the Accumulated Incidence at 7 days in both islands in the last week.

The island of Gran Canaria remains at alert level 3 although the evolution of healthcare indicators will continue to be closely observed, in case very high impact levels are reached at the hospital level in the coming days.

The indicators for risk assessment and alert levels of Covid transmission were modified at the end of November by the Ministry of Health given the current context of high vaccination coverage, for which an upward revision of the thresholds of the disease incidence indicators, giving greater weight to care.

Regarding healthcare indicators, the daily average of occupied conventional hospital beds increased by 40.5% compared to the previous week and remained at medium risk, with an average of 399 occupied beds. The percentage of occupancy in Tenerife is at a high risk level; in Gran Canaria and Fuerteventura at medium risk; in Lanzarote, La Palma and La Gomera at low risk; and in El Hierro in controlled circulation.

The number of occupied ICU beds maintains the upward trend that began six weeks ago, increasing by 26.9 percent compared to the previous evaluation. In the islands as a whole, an average of 67 ICU beds occupied two weeks ago to 85 in the last week, with an occupancy percentage of 16.5%, has risen to high risk. Tenerife rises to a very high risk level, Gran Canaria remains at a high risk level, while the rest of the islands are in controlled circulation.

The average age of all people hospitalized for Covid in the last 30 days is 67 years and 63 and a half years of those admitted to the ICU, all of whom are over 30 years of age. 52.5% of the people admitted to critical care units diagnosed during the last 30 days had not received the complete vaccination schedule. This is data to be assessed in a context in which more than 80.6 percent of the population of the Canary Islands is vaccinated; therefore, it is 52.5% of the 19.4% of the unvaccinated population.

80.1% of the people admitted for Covid and diagnosed in the last 30 days had no previous pathologies. This percentage increases in unvaccinated patients, in whom 87.8% had no other known pathologies.

The Ministry of Health insists on the need to maintain preventive measures to avoid risks of transmission of Covid: a use of a mask perfectly covering the nose and mouth; respect for social distance; maintain good ventilation and hand hygiene.