The Teguise Local Police, having seen the report from the Teguise Local Police Headquarters stating that the Zonzamas-Arrieta transport pipeline installation project (Northern Line 1) does not have a traffic signaling safety plan , has proceeded to notify the company in charge of the works of the obligation to stop until said plan is prepared and communicated to the affected residents. 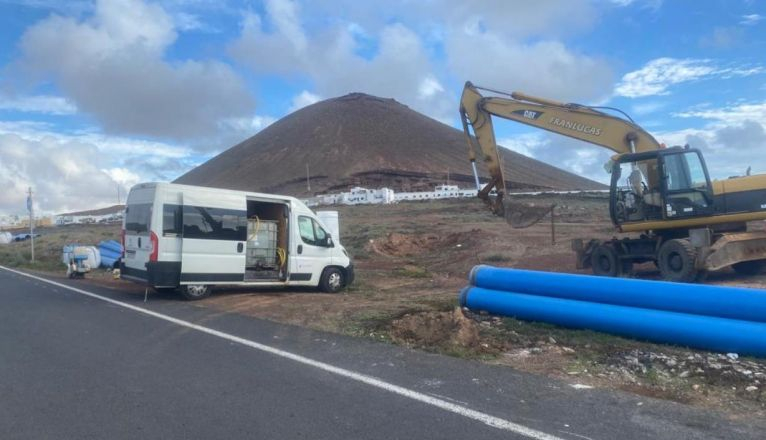 On Friday, the execution of the project began at the height of López Alvarado street and Bravo Murillo street, in the town of Tahíche, Teguise municipal area, but without any record to date of the pertinent security plan that implies defining and inform of the street closures or changes in the direction of traffic that are going to be carried out.

"The stoppage responds to the concern of the neighbours for an intervention that has begun to be carried out in the main arteries of the town of Tahíche without prior notice," explained Olivia Duque, who confirms that "the Technical Office of Teguise has not received any document that includes how traffic circulation will be organized during the closure of some roads”.

"We must ensure one hundred percent the safety of the entire town from the beginning to the end of a project that was already born without the consent of the residents of Tahíche," argues the mayor, lamenting that "neither the Lanzarote Cabildo nor the Government of the Canary Islands have never responded to the feelings of those affected by the installation of the Zonzamas-Arrieta transport pipeline”.

Olivia Duque says "personally and politically I have done everything possible to find a feasible alternative and a solution that would not affect so much, and now we can only hope and pray that this imposition and stubbornness does not cause more problems for those who have already warned loud and clear that this will not happen. it was the best solution to the lack of water supply in the northern zone”, she added.

“We are still waiting for information on the roadmap to be followed by the Cabildo and its contingency plan, if any, where we can identify risk situations that may affect the population and describe the measures to be implemented to prevent or minimize them from occurring, because those of us who will have to answer to our residents for the occurrences of others, will be as always, the ones who are closest to the citizens, a government team and a City Council that listens, attends and seeks consensus, ”says Olivia Duque, regretting that "since the first day of the commissioning of the work, the Local Police of Teguise has already had to intervene."