The German Andi Boecherer with a time of 8 hours, 34 minutes and 11 seconds and the Danish Michelle Vesterby (9:55:04) have been proclaimed this Saturday winners of the 'XXIX Ironman Lanzarote' co-organized by the Club La Santa and the Cabildo de Lanzarote, and had about 800 participants. 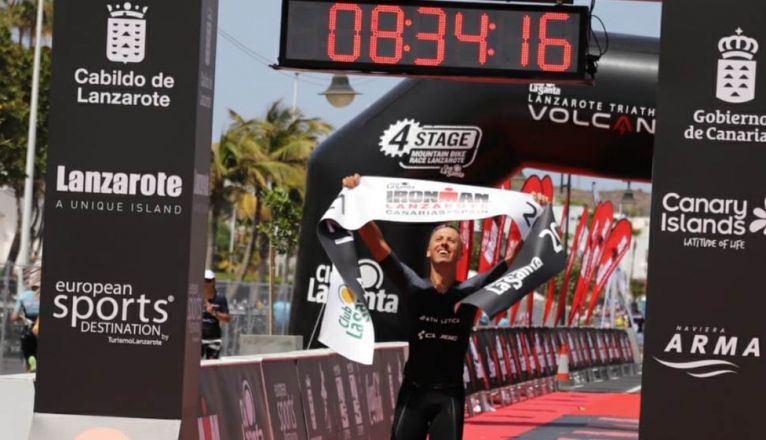 At seven in the morning the test started on a day that was going to be marked by the wind and, above all, by an intense heat that has put the triathletes to the test. In swimming, Australian Kastelein (50:15) and Frenchman Costes (50:20) came out of the water in the lead . After them appeared Heemeryck (50:21), very followed by Frommhold (50:44).

Once on the bike and facing the Timanfaya National Park, Kastelein held on in third place for the first 100 kilometers, until Hogenhaug and Boecherer accelerated their pedaling and Kastelein lost positions little by little.

Hogenhaug finished as the leader of the cycling segment with Boecherer very close to him , which led to anticipate that the final victory would be for one of the two. To finish the Ironman, the runners faced the 42.2 kilometer race on foot. In the tenth kilometer of the course, Boecherer was placed in first place and nobody could get him down from there. With eight kilometers to go, the German Stein overtook Hogenhaug and Trautman did the same shortly after. At the Puerto del Carmen goal, Boecherer raised his arms as the winner of the Club La Santa Ironman Lanzarote 2021, with a time of 8:34:11, Stein defended second place with a total time of 8:42:03 and third Trautman took place with his 8:43:00.

As for the female category, Vesterby began dominating.The Danish woman led the test in the water with a time of 59:45, followed by the French Genet, just two seconds behind Vesterby.

On the bike, Genet turned the situation around, leading the category with a very high pace and finishing the cycling section eight minutes ahead of Vesterby.

After starting the foot race in the lead, the Frenchwoman was forced to abandon and Vesterby would no longer lose the lead. With an excellent 9:55:04, the Danish triathlete was proclaimed the winner, with the British Siddall 47 seconds behind the champion and the French Mathieux finishing in third place , two minutes behind Vesterby.

Finally, regarding the novelty of this year, the first Long Distance Triathlon Military World Championship, which has been held within the framework of the Ironman thanks to the agreement signed by the organization with the Superior Council of Military Sports and FETRI, it ended with the victory of the Slovenian Kovacic, followed by the Russian Bryukhankov and with the Frenchman Claeyssen closing the podium. Sergio Sobrino, the first Spanish representative at the finish line, finished in a creditable eighth place in the specific classification of this championship. The test was launched with the participation of 43 military personnel from around the world.