The commemorative day of the 50 years of history of the tourist-residential town of Costa Teguise began this Saturday with the aerial demonstration of the SAR and its PUMA helicopter, and continued with the exhibition of 9 paratroopers from the Air Force Parachute Acrobatic Patrol and of Space (PAPEA), which flew over the sky of Costa Teguise after being launched from a C212 plane on Las Cucharas beach, over which they made 3 passes displaying the flag of the Canary Islands and that of Spain, showing their skill in the air. 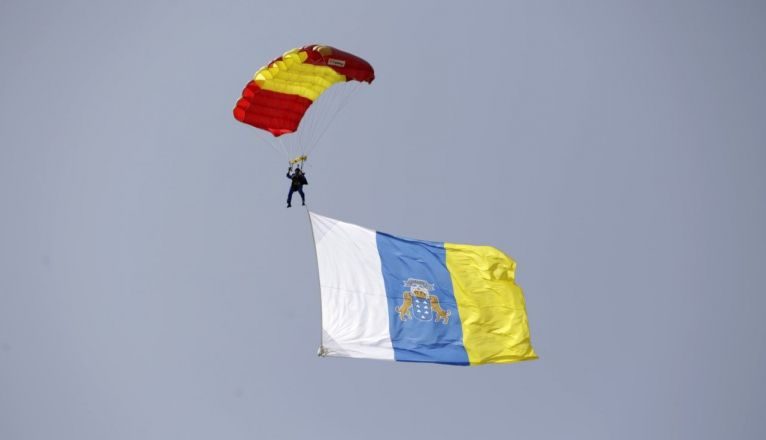 Captain Oumar Cheikh Larrocha, 2nd chief of the PAPEA, opened the event on behalf of his colleagues: "It is a very special day for us to have the opportunity to participate with our exhibition in the celebration of the 50th anniversary of Costa Teguise". The 9 skydivers who participated in the exhibition made several passes, in which they displayed the flag of the Air and Space Army, the flag of Spain and the flag of the Canary Islands. “Now we see how a flag of 54 square meters and 25 kilos of weight of the Community of the Canary Islands has just been unfurled, carried by the soldier Estrada, a native of Tenerife. As a Canarian, I get goosebumps when I see our beautiful colors in the sky,” said the captain in charge of narrating the show that thousands of people followed along Las Cucharas avenue.

The PAPEA is among the best skydiving teams in the world and has won more than 70 trophies in various international competitions and world championships, and stands out for being the only FAS Parachutist Unit authorized and instructed to carry out the well-known and spectacular maneuvers of "Relative of Bell", in which the jumpers link their parachutes to each other performing all kinds of acrobatics, and today all the figures began building the most basic formations known as stacks, in which the skydivers link their bells in stages, flying in the same direction until the parachute located in the lower part is hooked by the feet of the parachute located in the upper part.

The mayor of Teguise, Oswaldo Betancort, thanked the Army for its presence in this event "which begins its programming by honoring a mature tourist destination Costa Teguise. "Teguise is proud to have the collaboration of the members of the Armed Forces, who today have given us this spectacular gift that has had us all looking at the sky and that we have applauded and we have been moved to see our Canarian flag unfurl" .